Now we’re back with Elisa’s Adventures with the SpikenzieLabs Dice Kit! When we left off, I had accidently soldered the PIC Chip backwards. So it was time to take action and win this battle of the solder!

My weapon of choice was solder braid. It’s woven copper that can absorb hot solder.  I learned that there are several ways of unsoldering a piece. There is solder braid and then solder sucker, which is a little vacuum that sucks up hot solder.

With generous assistance from Mason Donahue, member of the Southside Hackerspace, we used the solder braid to pull up the solder. Basically, you put the copper braid on the part with the solder. You heat it up and the solder “flows” onto the copper braid. In this case, I had to unsolder all eight legs of the PIC chip. When doing this, it was important not to overheat the legs or the chip itself since this could cause problems. After all the solder was removed (or as much as possible), we used a small screwdriver to carefully lever the piece out while heating up the tiny legs at the same time. Patience is necessary; it takes some time because you really want to be careful not to break it or wrench it out.

But then victory was had! The piece came out!

After the PIC chip came out, I had to make sure that the holes were clear of solder. This involved a little bit more time with the copper braid but it didn’t take long to clear the holes.

This time, I soldered the piece correctly, making sure to check and double check it beforehand. The saying “measure twice, cut once” is really important to keep in mind. Also it helps to look at the outline on the PCB, which shows a tiny indentation that matches the one on the chip. Hah!

Then it was time to install the battery holder. Once again, the kit does a nice job of laying it out for you. The shape of the battery holder was outlined on the PCB so you know which direction it needs to go. For this, you have to solder the front side of it since the battery goes on the back. I used a little bit of electrical tape to keep it attached to the PCB while I soldered it. I had to be very careful when soldering it because I’m basically soldering between the LED lights. If you touch the soldering gun to an LED, you might break it or leave a nasty welt. But I was careful and it all worked out well.

Then I had to solder the remaining LED light. Again, I had to make sure that I was putting it in the correct direction. And then viola! The dice had seven dots! At this point, I put the battery into the holder to test it. All the lights lit up! Huzzah!

The last step of soldering was the piezo. It’s a circle with two wires, one red and one black, sticking out of it. The wire is very thin and somewhat delicate. The piezo is a part that is sensitive to pressure. This is how the dice will “roll” when it is tapped on a table. The PCB does a nice job of laying out where you need to put it. At the bottom of the PCB, there is the word “Piezo” with a box with two holes underneath. The left side has a B for black wire and the right side has R for red wire. Electronics by numbers! This was really helpful for me!

Again, I had to solder the piezo on the front side of the PCB. I carefully put the black wire through the B hole. The instructions suggested using tape to hold it in place while soldering but I bent the wire slightly so it wouldn’t move. After that, I did the same with the red wire in the R hole. Make sure that the PBC don’t touch because it might short. And then it was time to place the battery into its holders. Imagine a choir of angels singing right now because that’s how it felt.

The die was almost done! The last step was to put the acrylic base on the die. First, I had to peal off the blue protective covering from all the acrylic pieces so they were clear. I think they can scratch easily otherwise. There is the base with four holes and then four little pieces with two holes in each piece. These holes are for the screws. You are effectively making a sandwich of pieces. The screw goes into the PCB board, one acrylic block, another acrylic block, and then the acrylic board.  One has a little groove on it so that you can pass the wires through it. I used some glue to attach the piezo to the acrylic base. When I glued, I made sure that the wires were placed so that they are centered between two holes.

Then I screwed the PCB and the acrylic based together. This is where the sandwich of pieces came in. One really important thing to do is to make sure you properly place the grooved acrylic piece at the bottom on the stack so the wires can pass by without getting crushed.

To get this sandwich of pieces together, I found that laying the PCB with the screws on the side might help. Once I get everything lined up on one side, I rotated the screws but not tighten them entirely. If you tighten one side of screws too much, it will make the putting the other two screws on the other side really hard. So I then made my little sandwich again for the other side and screwed it in. Then I tightened all the screws.

Horns were playing; a tuba sounded in the distance. Huzzah! Then I was done!

It was alive! And working! No more snake eyes for me!

Every time I tapped it on the table, it would light up a random number between 1 and 6...like a dice but better and perfectly random! The SpikenzieLabs Dice Kit was a lot of fun to put together. I think the kit is good for a beginner. It took about 3 hours to put it together but part of that time was learning how to solder again. However, this doesn’t include the time to unsolder the PIC chip. That was actually the hardest part but that’s because we had to remove solder from 8 legs. It’s also little tricky since you solder on both sides of the board so you have to be careful.
The directions are clearly written and give important tips about how to do it. It’s important to read carefully. Also, the outline of the pieces and labeling on the PCB were a big help to me. It made sure that I put things where they were supposed to go. Even the PIC chip was labeled to aid the maker, I just reversed it. I would recommend this to another beginner!
Tweet Share Pin It Email 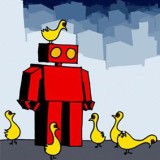 You’re welcome for the help! I enjoyed refreshing my own skills on desoldering in addition to sharing the knowledge.